The NWP SAF aims to improve and support the interface between satellite data/products and European activities in NWP.

The NWP SAF is one of several EUMETSAT SAFs (Satellite Application Facilities). Utilising specialist expertise from the Member States, SAFs are dedicated centres of excellence for processing satellite data and form an integral part of the distributed EUMETSAT Application Ground Segment. Further information about SAFs is available on the EUMETSAT web site.

The SAF for NWP interacts, where appropriate, with related work in other SAFs and in other EUMETSAT activities in order to enhance collaboration and to minimise duplication of effort. 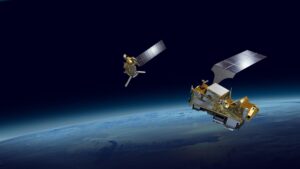 NWP SAF scientist Emma Turner (Met Office) has produced a literature review on microwave and sub-millimetre spectroscopy focusing on channels of the MWI, MWS and ICI instruments on the upcoming MetOp Second Generation satellite mission due to be launched in the next few years. This review was originally written as Task 1 of a collaborative project entitled, ‘EUMETSAT study on atmospheric absorption models using ISMAR data’
Read More…