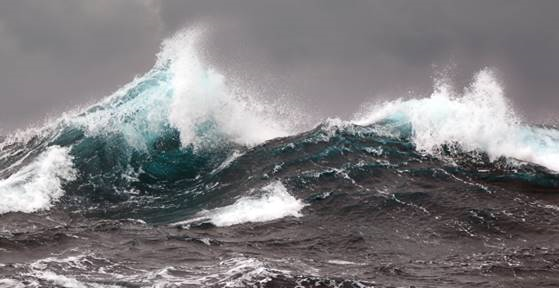 RTTOV is a key deliverable of the NWP SAF. It is a critical component of the radiance observation operator used at most operational centres and is therefore vital for using the vast resource of satellite radiance measurements, which together provide by far the largest observational impact on the skill of Numerical Weather Prediction.

RTTOV has three key elements, which are needed to run the radiative transfer solver in an “all sky, all surface” data assimilation application:

In addition, the methodology for solving the radiative transfer equation itself is important, especially in the presence of scattering.

The European Commission GAIA-CLIM Horizon2020 project identified1 that uncertainty in surface emissivity limits reference-quality applications of microwave imager data and imager channels on sounders. This is true over all surfaces, including the ocean, where the FAST microwave Emissivity Model (FASTEM) has for many years provided these calculations for RTTOV. In data assimilation, lack of knowledge of systematic error in Fastem necessitates a bias correction, both in real time and reanalysis applications. It also reduces our confidence that we are giving the correct weight to these observations in the data assimilation system.

What does Reference Quality mean?

Reference quality means that the uncertainty is well known,
necessarily mean these errors are small, though it is self
evident that observations with very large errors are less
useful than ones with small errors!

In general, bias correction relies on there being sufficient reference quality observations. Radio occultation and some radiosondes provide this for atmospheric temperature. However, for humidity, clouds and surface parameters we lack a good reference. It is highly desirable to strive towards making some radiance measurements, and the observation operators needed to use them, reference quality. The GAIA-CLIM study demonstrated that uncertainty in the surface emissivity modelling is important.

In addition to the GAIA-CLIM recommendation, groups like the International TOVS Working Group2 and ECMWF-JCSDSA3 workshop also recognised this gap and called for a response from the scientific community. An International Space Science Institute team (ISSI)4 was formed to address the development of a reference quality model for ocean surface emissivity and backscatter from the microwave to the infrared. The ISSI team is led jointly by Stephen English (ECMWF) and Catherine Prigent (L’Observatoire de Paris) and has strong links to the NWP SAF, via Stephen, and with complementary efforts at the Joint Center for Satellite Data Assimilation (JCSDA) with the Community Radiative Transfer Model (CRTM).

Lise Kilic and Catherine Prigent at L’Observatoire de Paris are both in the ISSI team and had already been evaluating errors in models like Fastem against observations such as AMSR2 and SMAP5 . The NWP SAF provided vital impetus to extend and enhance these comparisons, by providing an Associate Scientist (AS) mission to Lise Kilic. A key goal was to use the GPM Microwave Imager (GMI) as a reference. GMI is widely considered to be the best calibrated microwave radiometer ever6.

An important aspect of this work is the range of frequencies considered. It can sometimes be possible to tune models to give realistic results at a single frequency, or across a narrow band of frequencies. In this study, GMI observations from 10.65 to 166.5 GHz have been compared with simulations from three radiative transfer models (RTMs): FASTEM7, a fast model parameterized from a physically-based model; RSS8, an empirical model fitted to satellite observations; and LOCEAN9, a physically-based model that is expected to be the reference model, once adjusted to a wide range of observing conditions. To develop a model that is reliable and whose uncertainty can be calculated across a wide range of frequencies, constitutes a very strong test of the science and a major challenge to the scientific community. 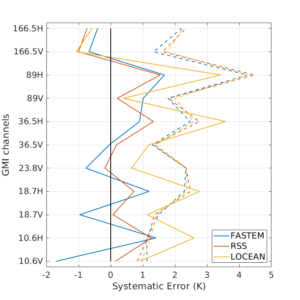 Systematic errors (TBobs-TBsim) for GMI channels from 10.65 to 166.5 GHz for the 3 ocean
RTMs in solid lines, and the associated StD in dashed lines

This work will directly contribute to the future operational meteorological missions (e.g. Metop-SG) that will soon carry innovative instruments in the microwave and infrared domains (MWI, MWS, ICI, IASI-NG), as well as candidate missions for Copernicus expansion programme (CIMR).

So what did the study find out?

The AS mission demonstrated that changing the current dielectric model in the LOCEAN model to the one used in RSS could improve the LOCEAN simulations at higher frequencies, and reduce the errors observed at low SST. For the ocean wind speed dependence, it is more complicated as all the models show large errors for wind speeds above 7 m/s. The best performing parameterizations of the sea surface emissivity at very high wind speeds have been developed from fits to radiometric observations, but this risks aliasing biases in one system onto others, and is not consistent with the aspiration to reference quality modelling.

Nonetheless this careful analysis has provided an estimate of how large the uncertainty is, and how it varies with the meteorological conditions, as well as giving direction to the ISSI efforts. Further details are reported on the ISSI website, and the full report from the AS mission can be found here.

Whilst this work has provided clear insights into the uncertainty and behaviour of errors, benefits to the NWP SAF key RTTOV deliverable are dependent on the Fastem model being replaced or improved. The Fastem model is only as good as the model it is trying to fit, and in some situations the fast model linear regression predictors may not be optimal. In order to benefit from the efforts in the ISSI team it is also necessary to develop efficient capability to replicate accurately and easily the outputs of a model too slow to run in operations. Artificial Intelligence offers an approach that will be investigated to replace the linear regression in Fastem. This will be taken forward in a follow-up AS mission and will enable the benefits of both the first AS mission and the ISSI team developments to directly improve RTTOV and to realise tangible benefits for NWP SAF users.

The full report from this AS mission can be found at: https://nwp-saf.eumetsat.int/site/download/visiting_scientists/reports/nwpsaf-ec-vs-029.pdf